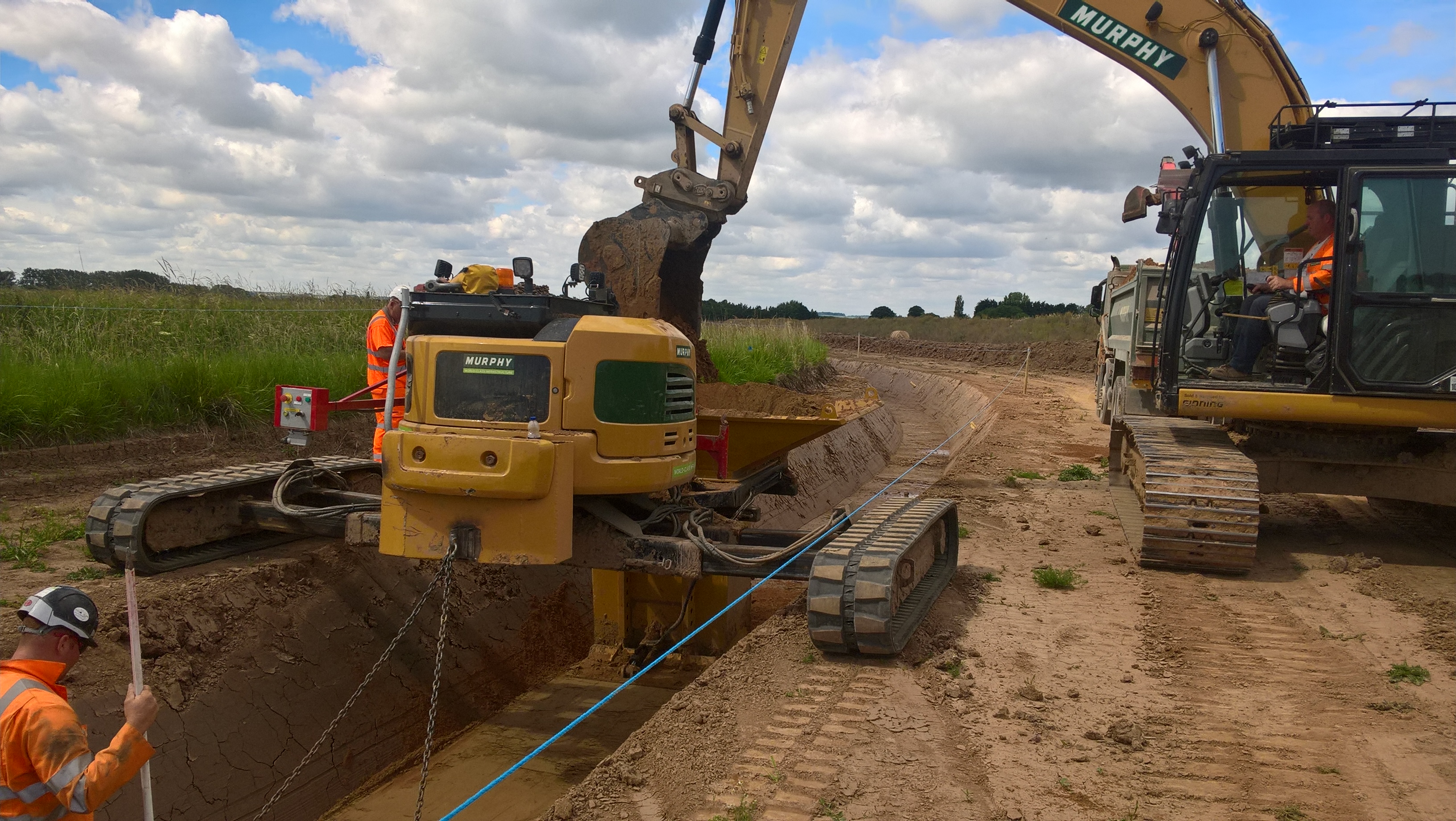 Murphy secures circa £100m contract, supporting development of their UK infrastructure business, and opening up further opportunities for local companies

Triton Knoll has signed its first major construction contract, reinforcing its commitment to the UK supply chain with the award of a circa £100m contract to UK-based construction and engineering specialists J Murphy & Sons Ltd.

The contract comes as the circa 860MW(2) innogy project begins its initial works onshore, in preparation for the main construction of the substation and cable route later this summer.

National infrastructure company Murphy have already been working on the design and are now preparing to install the project’s onshore cable circuits, part of the Triton Knoll Electrical System (TKES), which stretches from the point of landfall near Anderby Creek, to a new Triton Knoll Substation at Bicker Fen.

The TKES installation will present one of the biggest engineering challenges of its kind, with almost 60kms of onshore underground cable to install, and over 300 obstacles to be crossed by individual horizontal direction drills – three times more than what’s believed to be the previous UK record for an infrastructure project.(1)

“Murphy has already engaged local firms during preliminary works for Triton Knoll, and has demonstrated their willingness to continue working with us to ensure we can maximize opportunities from our investments for local and UK businesses, throughout the project lifecycle.

“We’re very excited that Murphy is now on board as we prepare to start onshore construction in the coming weeks and months.”

Initial works to prepare for the onshore main construction gets underway during June 2018 at various locations along the TKES onshore cable route and will include the following activity:

Public Information Days to ensure the local community are fully informed of activity around the project will take place from 26 – 29 June. See our website for more information: www.tritonknoll.co.uk

Murphy will shortly begin setting up new project offices on the cable route where it intersects the A16, which affords good transport links to the rest of the county. This will eventually house over 100 UK staff. In addition, the civil engineering, specialist excavation teams and horizontal directional drilling (HDD) works required to deliver these major works will attract a large UK-based workforce for the duration of the installation, and Murphy has already begun to bring on board local companies following a recent successful Triton Knoll supplier event earlier this year.

Murphy CEO John Murphy said: “This is one of the biggest power projects that Murphy will have worked on and it’s a real marker of the upward direction in which our business is going, as we continue to develop and grow. To have been chosen for such a large and prestigious project shows that we are trusted by innovative companies like innogy to deliver world-class infrastructure projects that will improve people’s lives.

“It’s an incredibly exciting and complex project, and we’re looking forward to working closely with innogy to provide first-rate results.”

Triton Knoll is an innogy-owned offshore wind farm, located 32kms off the Lincolnshire coast. It has a planned installed capacity of 860MW(2), capable of supplying the equivalent of over 800,000 UK households per year, with renewable electricity.

Initial works to prepare for the onshore main construction gets underway during June 2018 at various locations along the TKES onshore cable route and will include the following activity:

Public Information Days to ensure the local community are fully informed of activity around the project will take place from 26 – 29 June. See our website for more information: www.tritonknoll.co.uk

The challenge of installing a 60km onshore cable infrastructure has been described as “unprecedented in the UK” not least of all due to the extent of the engineering required to complete it.

It is estimated that the average annual generation expected at the site could be equivalent to the approximate domestic needs of an expected minimum of 800,000 average UK households.

Energy predicted to be generated by the proposal is derived using wind speeds monitored in the local area and correlated with long term reference data. The energy capture predicted and hence derived homes equivalent figure may change as further data are gathered.

innogy SE is a leading German energy company, with revenue of around €43 billion (2017), more than 42,000 employees and activities in 16 countries across Europe. With its three business segments Renewables, Grid & Infrastructure and Retail, innogy addresses the requirements of a modern, decarbonised, decentralised and digital energy world. Its activities focus on its
more than 22 million customers, and on offering them innovative and sustainable products and services which enable them to use energy more efficiently and improve their quality of life. The key markets are Germany, the United Kingdom, the Netherlands and Belgium, as well as several countries in Central Eastern and South Eastern Europe, especially the Czech Republic, Hungary and Poland. In renewable power generation, the company is also active in other regions, e.g. Spain, Italy and the USA, with a total capacity of 3.9 gigawatts. As a leader of innovation in future-oriented fields like eMobility, we are represented in the international hot-spots of the technology industry such as Silicon Valley, Tel Aviv and Berlin. We combine the extensive expertise of our energy technicians and engineers with digital technology partners, from start-ups to major corporates.