Triton Knoll is an 857MW ‘Round 2’ offshore wind farm, owned by RWE (59%), J-Power (24%) and Kansai Electric Power (16%). RWE managed the construction phase of the project and will operate on behalf of the partnership. 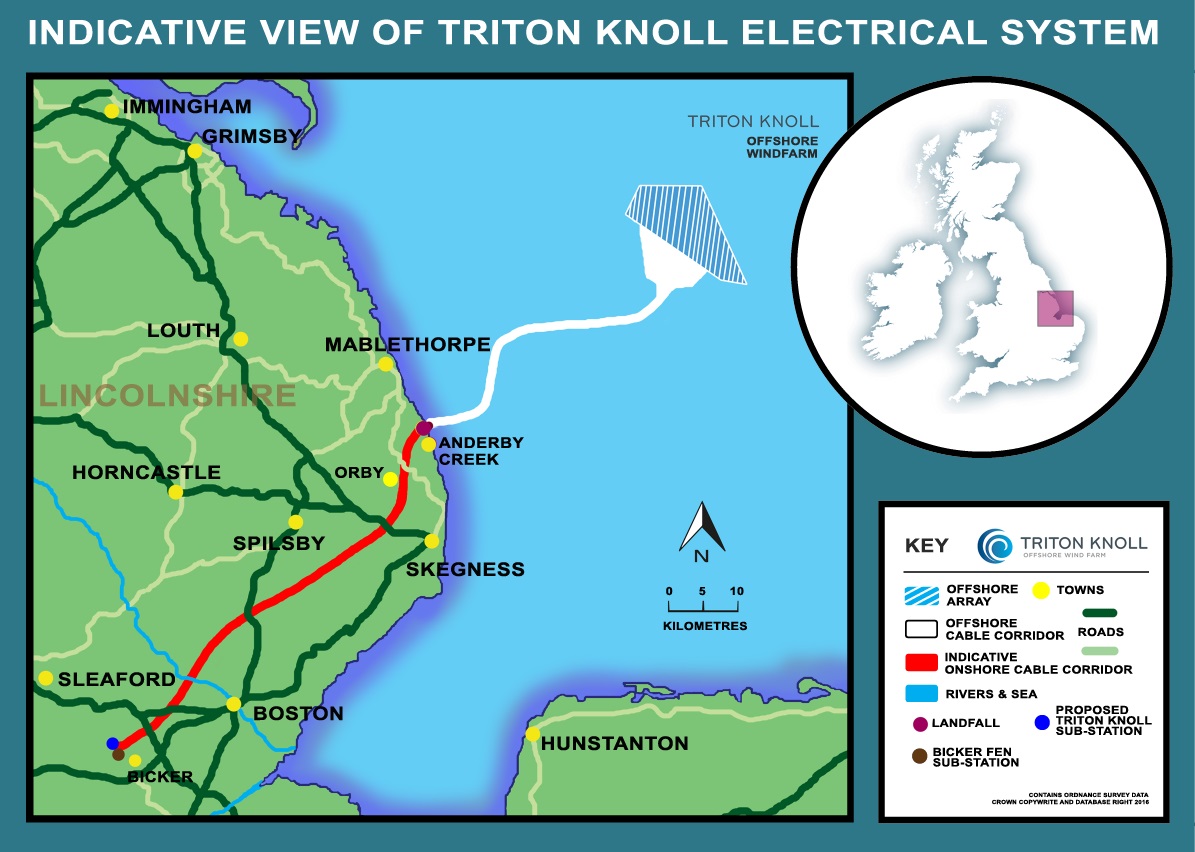 Triton Knoll is within the Greater Wash strategic area, located off the east coast of England, approximately 20 miles off the coast of Lincolnshire and 28 miles from the coast of north Norfolk. This is one of three 'Round Two' strategic areas around the coast of Great Britain, which were released for offshore wind development by The Crown Estate and the Government in 2003.

At the time of the Round 2 tender process, RWE Renewables (at the time called RWE npower renewables) was awarded a license to develop an offshore wind farm called Triton Knoll up to a maximum of 1,200 megawatts (MW). Triton Knoll was consented in two separate applications (the Offshore Array and the Electrical System), but was constructed and is being operated as one project. Triton Knoll was successfully awarded a Contract for Difference by the Department for Business, Energy & Industrial Strategy, in September 2017 and it achieved Financial Close in August 2018. Onshore construction commenced in September 2018 and was successfully completed in October 2021. Landscaping works at the Onshore Substation were completed in March 2022. Offshore construction commenced in January 2020 and the final wind turbine was successfully installed in September 2021. Turbine commissioning was successfully completed to programme in January 2022 and the project is now fully operational.

It is estimated that the average annual generation expected at the site could be equivalent to the approximate domestic needs of an expected minimum of 800,000 average UK households. Energy predicted to be generated by the proposal is derived using wind speeds monitored in the local area and correlated with long term reference data. The energy capture predicted and hence derived homes equivalent figure may change as further data are gathered. Equivalent homes supplied is based on an annual electricity consumption per home of 4100 kWh. This figure is supported by recent domestic electricity consumption data available from The Digest of UK Energy Statistics and household figures from the UK National Statistics Authority.