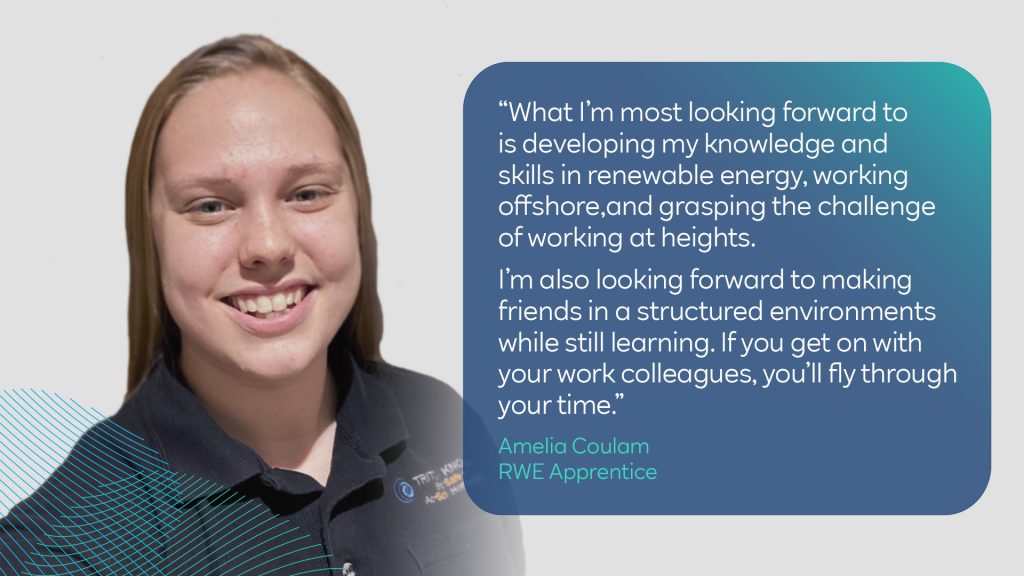 The application process – “worth the wait”

Amelia heard about RWE’s Wind Turbine Technician apprenticeship from local social media and decided to ‘go for it’. A few weeks after applying she received an email inviting her to an open day at Triton Knoll.

At the open day, Amelia completed a written assessment, joined in team exercises and took part in an interview. She noted afterwards that: “They were very keen to know about my personality. The main thing they wanted to know was whether I would fit in with the team.”

After two more weeks of anxious waiting, Amelia got a phone call to say that she’d made it to next round. Due to COVID-19, however, the next stage had to be cancelled. “They told me that, because of the restrictions, they were going to pick the four top candidates so far. A week later, I got a call to say I’d been successful. I was absolutely over the moon!”

Amelia has just completed the first of two years at college, in Wales, which will be followed by a year’s hands-on experience at Triton Knoll. “So far I’ve been learning all about the practical elements,” says Amelia. “I’ve been working on the mechanical and electrical side of things, understanding technical drawings, and how to put together a reflective account of the process”.

Amelia said that the biggest challenge she faced in the first year was “moving away from home and getting used to a new environment.” But she also said that “the process of self-development” was one of the most enjoyable parts of the experience.

Asked for her top feel-good moment during the first year, Amelia said: “The best part so far was my first practical assignment. I was given a technical drawing, tools, and materials, and from that I built a fully functional wind turbine component.”

“What I’m most looking forward to is developing my knowledge and skills in renewable energy, working offshore, and grasping the challenge of working at heights,” said Amelia: “I’m also looking forward to making friends in a structured environment while still learning. If you get on with your work colleagues, you’ll fly through your time”. She is looking forward to starting work as a fully fledged Wind Turbine Technician and plans to work her way up the ladder to a production manager role.

Amelia’s advice to you

Amelia’s advice to anyone considering an apprenticeship is simple: