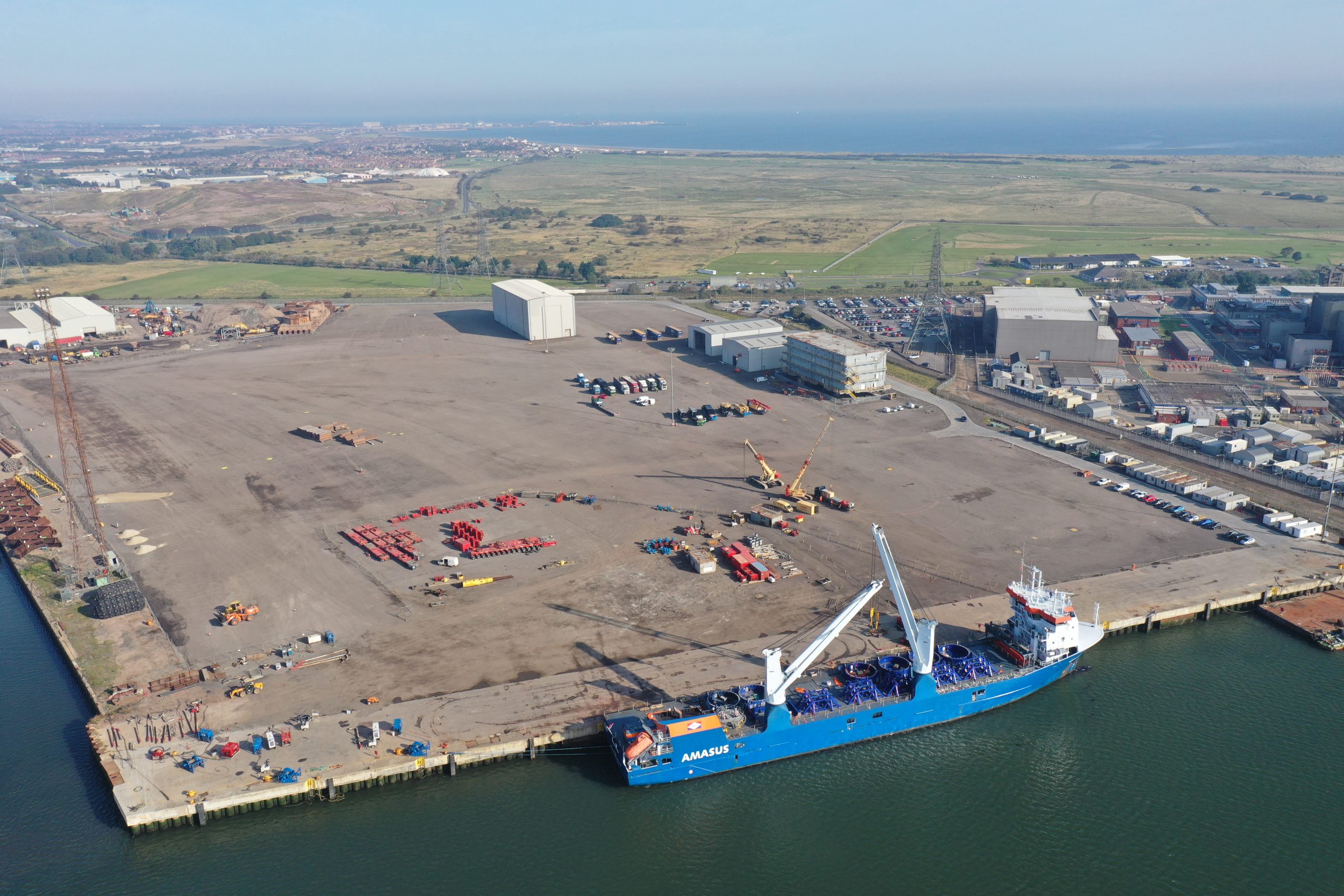 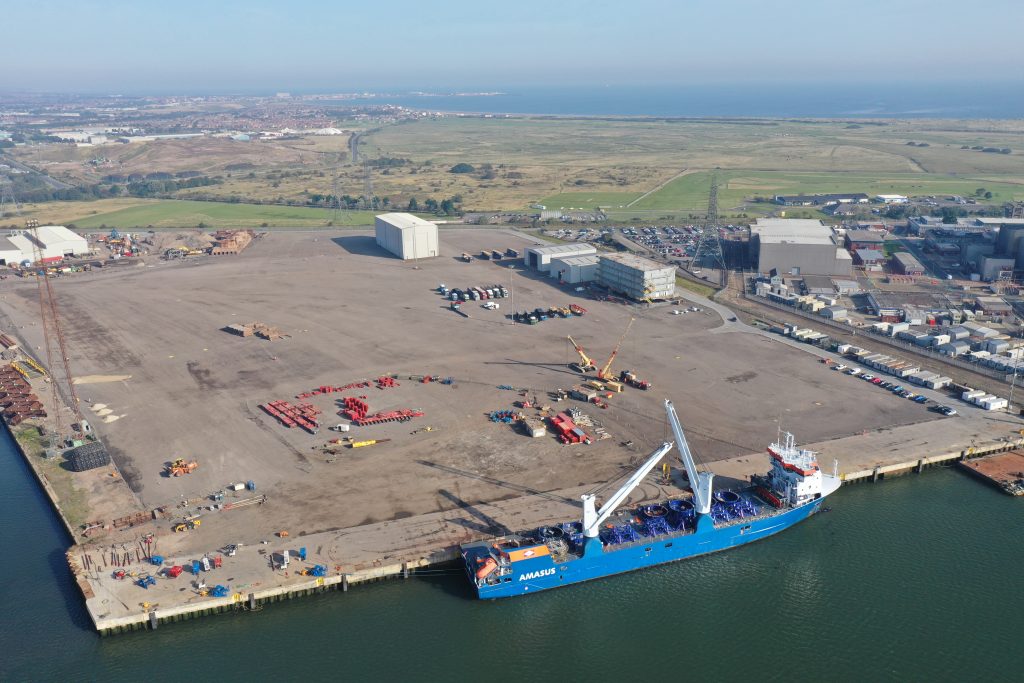 MHI Vestas has moved in to Able Seaton Port (ASP) in Hartlepool ready to install 90 of its V164-9.5 MW turbines at the Triton Knoll project, beginning in Q1 2021.

The move signals a major ramp up in MHI Vestas’ UK offshore wind activity supporting the leading role of offshore wind in the delivery of the UK’s Net Zero ambitions, while helping drive a green economic recovery from the ongoing COVID pandemic.

ASP will serve as the turbine logistics and pre-assembly hub for the project, with components expected to arrive from next month. Turbine tower sections, blades and nacelles will be marshalled and pre-assembled at ASP, before being loaded onto vessels for transport to the wind farm.

Triton Knoll, the 857 MW offshore wind farm, is being built by RWE Renewables in partnership with J-Power and Kansai Electric Power, and is RWE’s most powerful offshore project under construction. The wind farm will be powered by 90 MHI Vestas V164-9.5 MW turbines, which are due to be installed 32km off the Lincolnshire coast beginning in Q1 next year. Once fully operational, it will be capable of supplying renewable energy equivalent to the needs of over 800,000 UK homes.

Each turbine consists of three 80m long blades, which are manufactured at MHI Vestas’ facility on the Isle of Wight and finished at its Fawley plant across the Solent. The Fawley facility is a decommissioned, oil-fired power plant that has been repurposed into a state-of-the-art painting and logistics facility for the 80m-long blades.

“MHI Vestas’ commitment to the UK is demonstrated by the local benefits we have prioritised for the Triton Knoll project,” said MHI Vestas VP and UK Country Manager, Julian Brown. “Able UK’s close collaboration with MHI Vestas to prepare the ASP site for Triton Knoll has made it an easy choice to use this top-class facility. The site covers approximately 140,000 square metres with heavy duty deep water quays, a vital pre-requisite for a project the scale of Triton Knoll.

“The Triton Knoll project will deliver clean, domestic offshore wind power to UK customers with added national benefits. Not only will most of our suppliers at ASP be British companies, but the vast majority of the employees involved will also be from the UK.”

Port owner Able UK carried out extensive site preparation works from November last year, to create a site suitable for the project to move into. MHI Vestas, in turn, has now begun to prepare the site at ASP ready for the impending arrival of turbine components, prioritising UK companies in the delivery of the project. As a result, ASP now hosts technicians on-site from local suppliers, including Global Wind Service (GWS), Dawson and Boston Energy, as well as MHI Vestas employees. The main crane and Self-Propelled Modular Transporter (SPMT) to be used at ASP for moving turbine components will be supplied by Weldex, based out of Alfreton, UK.

Julian Garnsey, Project Director for Triton Knoll and RWE Renewables, said: “At Triton knoll we are committed to ensuring that our investments from this flagship project benefit local coastal communities, and the UK’s expanding offshore supply chain as much as possible.

“As part of that commitment we have made a significant investment to establish wind turbine handling facilities for the first time at Able Seaton Port. This places the North East of England at the heart of the delivery of Triton Knoll, and leaves a legacy for future offshore wind farm projects to be constructed from the region.

“We are delighted to be working with MHI Vestas and Able UK delivering this new UK infrastructure, and we are looking forward to the first Triton Knoll components arriving at Seaton in the coming months, ready for installation to begin early next year.”

Peter Stephenson, Able UK’s Executive Chairman, commented: “We have enjoyed a long and constructive relationship with Triton Knoll and MHI Vestas culminating in their selection of ASP – it’s a massive vote of confidence in the UK, ourselves and the Teesside supply chain. Our sustained investment means we can provide a bespoke and tailor-made solution for Triton Knoll.

“The offshore wind sector is potentially on the cusp of something very special. We have a clear and unambiguous policy from Whitehall through the Sector Deal in the Industrial Strategy, and the increasingly demanding targets for both power generation and the extent of UK content. Combine this with the sector’s extraordinary efforts in terms of developing new products and significantly reducing costs and the sector is set to become a dominant factor in a post Covid-19 UK economy.”

MHI Vestas will be installing several projects across the UK and Scotland in the coming years, including Triton Knoll, Moray East, Seagreen and Kincardine. These projects will continue to be supplied by MHI Vestas’ blade facility in the Isle of Wight and supported from existing offices in Warrington and London. MHI Vestas currently employs 1,096 people in the UK, all focused on delivering clean offshore wind energy to meet the UK government’s ambition of increasing new offshore wind capacity to 40GW by 2030.